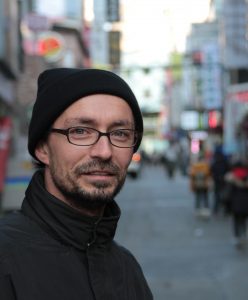 A native of the East German city of Leipzig, Mark has been living in South Korea for almost 15 years where he has worked in various film related jobs. From 2007 till 2015, he worked at the Seoul Film Commission taking care of international productions and co-productions shooting in Seoul (See filmography at imdb). Among the countless projects  he was in charge of the initial location scouting for Avengers: Age of Ultron and Sense8. He got an in-depth insights into the Korean film industry, knows the city like the back of his hand and is well networked in the industry.

Since October 2015, he’s been working as freelance location manager, production manager and production coordinator for int’l film and TV productions. From 2015 to 2018, he was an advisor to DOK Leipzig focusing on Korea and Asia.